Finding secrets in the eyewall of a tropical cyclone

One of nature’s deadliest, most destructive and least predictable forces is now better understood thanks to research conducted at UNSW Canberra. 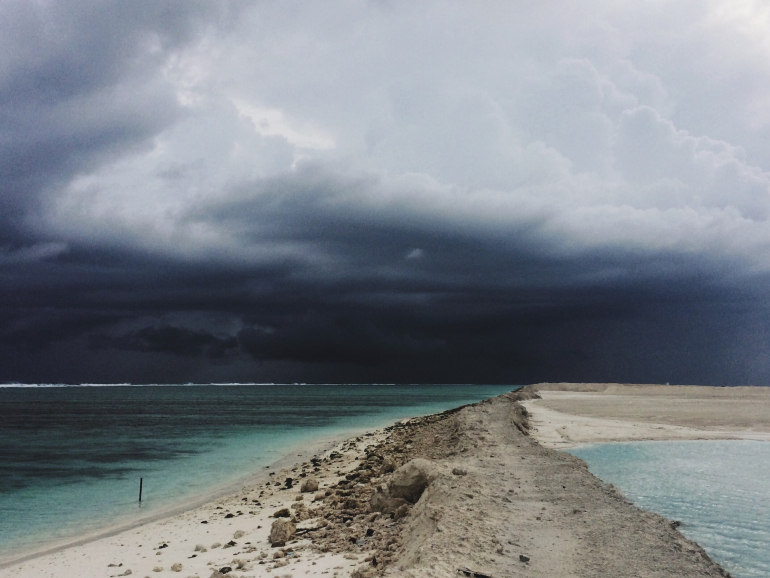 Having caused 14 fatalities during its days of destruction in 2017, Tropical Cyclone (TC) Debbie was the deadliest cyclone to hit Australia since TC Fifi, which killed 29 after making landfall in Western Australia in 1991.

Debbie also caused an estimated US$2.67 billion in economic loss, meaning it was the most devastating cyclone to hit Australia since TC Tracy, in 1974.

Alongside China and the US, Australia is one of the countries most impacted by tropical cyclones. Of course, that also makes it a good place to study their behaviour.Dr Difei Deng, ARC DECRA Fellow and lecturer at UNSW Canberra, with Professor Liz Ritchie-Tyo, recently had a research paper published in an American Meteorological Society journal. Their research looked at behaviours and evolutions within TC Debbie’s inner-core structure, during the cyclone’s rapid and powerful offshore intensification.

“With the damage a tropical cyclone can cause, including strong winds, heavy rainfall, flash flooding, landslides and storm surge, it’s very important that we improve our knowledge around their behaviours,” Dr Deng said.

“The more knowledge we have, the better we can predict that tropical cyclone behaviour. That is knowledge that will save lives.”

“The prediction of tropical cyclone intensity, and intensity change, has been the greatest challenge for the global, operational forecasting community. And so it’s a top priority for researchers and research institutes.”

Favourable conditions for an increase in tropical cyclone intensity include warm ocean temperatures, weak wind shear as high winds at altitude can put stress on a cyclone, causing it to weaken, as well as higher moisture, which is why tropical cyclones build their power over oceans.

Those conditions were present for TC Debbie before it made landfall near Airlie Beach on March 28. But that didn’t explain why Debbie’s intensity increased so rapidly from Category Two to Category Four.

“The purpose of this paper was to understand what caused the rapid intensification process of this tropical cyclone,” Dr Deng said.

In the eye of a killer storm

One of the secrets to tropical cyclone intensification is to be found at its core.

Look at a satellite image of a tropical cyclone and you’ll see at its centre what appears to be a hollow hole. This is what we know as the cyclone’s eye. Surrounding this eye is a ring of intense thunderstorms called the eyewall.

But look closer and you’ll see fine structures embedded within the eye and eyewall. You might also see several mesovortices, straight-line segments that can give the eye a polygonal, rather than round, appearance in some mature cyclones.

These mesovortices can cause, very generally, a breakdown and temporary weakening in the eyewall ring. They reveal the unstable nature of that particular eyewall as it transitions between a relatively symmetric eyewall and a polygonal eyewall with multiple mesovortices.

“The entire rapid intensification process of Debbie was characterised by the periodic genesis and decay of these eyewall mesovortices,” Dr Deng said.

“This resulted in the periodic breakdown and re-establishment of the eyewall – the part of the cyclone that appears as a white cloud layer around the eye.”

Why is this a problem? When the eyewall breaks down and re-establishes itself, it also draws higher energy from the warmth and moisture of the ocean back to the eyewall, invigorating the convection and fuelling the cyclone’s intensification.

“So, it’s not just the fact that the mesovortices are there,” Dr Deng said. “It’s also about the evolution of those mesovortices, how they move and how they interact with the parent eyewall. All of this causes the intensity variation. That’s what we found in our research and reported in our paper.”

How do you study a cyclone?

Dr Deng and Ritchie used satellite imagery, weather radar data from the Australian Bureau of Meteorology, as well as the reanalysis data from the National Centers for Environmental Prediction to build and validate the high-resolution weather research and forecasting (WRF) simulation of TC Debbie.

A WRF simulation is built in a digital environment. It enables the production of an accurate simulation of an event, whilst also allowing researchers to adjust certain variables to explore their outcomes.

“There is a lot more work to do,” Dr Deng says.

“But I hope the insight from this work helps rapid intensification forecasting of tropical cyclones, as well as the better understanding of satellite imaging for numerical modelling and for forecasting modelling results.”

“I’d like to see how readily this knowledge can be applied to the forecasting system, and also how common is the evolution of mesovortices in other rapid intensifying tropical cyclones,” she said.

“Hopefully, I can get a grant to continue in this line of work.”