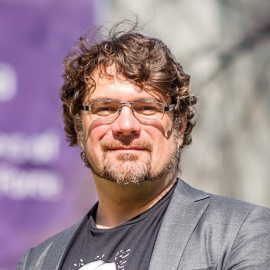 Are you interested in Graduate Research?  Explore some of the PhD Study Opportunities at UNSW Canberra.  We offer a diverse range of Scholarships Opportunities to domestic and international students to suit you and your situation.

Scholarships of $35,000 (AUD) are available for PhD applicants who achieved H1 (High Distinction) in their undergraduate program and/or have completed a Masters by Research.

In 2017 I was awarded a Future Fellowship by the Australian Research Council in the School of Science at the University of New South Wales Canberra. I’m working on models and simulations of thermonuclear supernova explosions and their associated nucleosynthesis

I am an associate editor for the Cambridge University Press journal PASA (Publications of the Astronomical Society of Australia) and on the steering committee for ANITA (Australian National Institute for Theoretical Astrophysics).

From April 2014 - April 2017 I was a SkyMapper research fellow at the Research School of Astronomy and Astrophysics (Mount Stromlo) in the group of Brian Schmidt at the Australian National University.
Before that, I was an Emmy Noether postdoc at the Max Planck Institute for Astrophysics in the supernova group of Friedrich Röpke in Garching, Germany (Sep 2008 - Jun 2011) and a postdoctoral researcher at the Graduate School of Theoretical Physics and Astrophysics at the Universität Würzburg in Germany (Jun 2011 - Dec 2013).
I received my PhD in 2008 from The University of Chicago, under the supervision of Prof James Truran. I spent 5 months of my PhD as a Marie Curie Fellow at the European Centre for Theoretical Studies in Nuclear Physics and Related Areas (ECT*).

ARC Future Fellowship: FT160100028 "Supernovae as the Origin of Antimatter in our Galaxy"