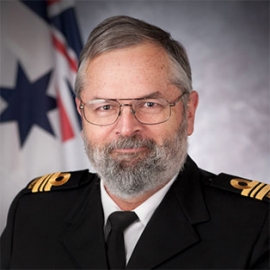 Dr Mark Bailey completed his Doctorate at the Australian Defence Force Academy in 2019. The thesis is entitled ‘The Strategic and Trade Protection Implications of Anglo-Australian Maritime Trade 1885-1942’.  He joined the Royal Australian Naval College in 1979 as a Seaman officer, serving aboard a variety of vessels including the aircraft carrier HMAS Melbourne and frigate HMAS Yarra. He also served on the training staff at the RAN Naval College as well as fulfilling staff, security and intelligence positions. He began researching trade protection in the early 1990s and undertook the RAN Staff Course in 1993, subsequently specialising in intelligence at the Maritime Intelligence Centre and Joint Intelligence Centre before transferring to the RAAF as an Intelligence Officer, transferring to the Active Reserve in 2002 and working in strategic logistics, law enforcement intelligence, counter-terrorism and government-industry liaison positions.

He rejoined the RAN Active Reserve in 2015 as a Maritime Trade Operations Branch Lieutenant-Commander. From this time he has been near continuously on full-time service. He is currently the Staff Officer Naval Force Analysis in the Directorate of Navy Capability Planning. Dr Bailey has published articles ranging from the Imperial Japanese Army's transport submarine fleet of WWII to and has researched and written extensively about the Imperial trade system, its performance, management and protection in the global wars, and Australia's role in that system. He is a member of the Naval Studies Group and is currently running the international ‘Cradock Project’ with the Irish scholar John French. This is a complete, primary source re-evaluation of Rear Admiral Christopher Cradock’s mission performance up to and including the Battle of Coronel. He intends to publish this as ‘Cradock’s Choice’ in 2020 under USNI auspices before developing a book from his thesis (tentatively entitled ‘Foundation of Victory’) under USNI auspices but also part of the ‘Corbett 100’ project. He is acting as Australian liaison for the King’s College-USN War College ‘Corbett 100’ project.