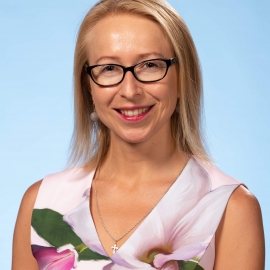 Natalia is a Research Fellow at the University of New South Wales at the Australian Defence Force Academy in Canberra. As part of the collaborative research group ‘Values in Defence & Security Technology’ (VDST) based at the School of Engineering & Information Technology (SEIT) she is looking at how social value systems interact with and influence research, design and development of emerging military and security technology and the questions of interdependence of technology and governance, both in the military and civil context. Natalia’s broader research interests include law of armed conflict, human rights law and comparative law.

Prior to Joining SEIT, Natalia was a doctoral student at the University of Melbourne (2014-2018). Her thesis examined the duty of States Parties to the 1977 Additional Protocol I to the Geneva Conventions to carry out legal reviews of weapons under Article 36 of the Protocol. Throughout her PhD she was a recipient of the Australian Postgraduate Award and the Melbourne International Research Scholarship. She also held a position of Teaching Fellow in the subject Comparative Legal Traditions (2015-2018) and supervised students undertaking the JD subject ‘Legal Internship’ (November 2015 – April 2017).

Natalia’s non-academic career counts positions within the Legal Department of Tipico Co. Ltd., a sports betting company where she worked on the areas of European law, contract law and Maltese gaming regulations (2013). Prior to joining Tipico, she dealt with questions of labor and contract law as part of the HR Department of Fresenius Medical Care, currently the world’s largest integrated provider of dialysis products and services (2011). She was also in charge of administering contracts within the CDept Business Development of Boehringer Ingelheim Animal Health GmbH, a global research-driven pharmaceutical company (2007).

Since 2014, Natalia is a member of the Programme on the Regulation of Emerging Military Technology (PREMT) formed by a group of scholars who study and advise on the legal, ethical and social implications of new and emerging military technologies.