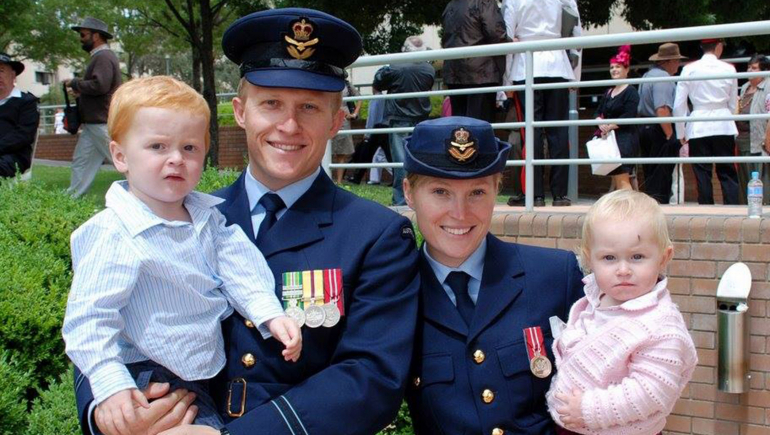 Emily and Adam’s story began in 1999 when Emily, a first-year electrical engineering student at UNSW Canberra (ADFA), bought some second-hand textbooks from one of Adam’s squadron mates.

Adam was a second-year aeronautical engineer at the time. Though they both joined from Adelaide, it was the couple’s first meeting. In different years and different squadrons, it was a few more chance encounters before Emily first approached Adam.

Given their modest salaries at the time, Adam took Emily to the Tradies Club in Dickson for a two-for-one schnitzel night. It was on this date that Adam discovered Emily was actually a vegetarian – luckily for Adam that date didn’t detract Emily from wanting to see him again!

They both loved their time at UNSW Canberra and ADFA. Apart from meeting each other, their favourite parts about their time studying were the small class sizes, which meant they became close with all their classmates, most of whom they are still in contact with.

They also loved that they had a mixture of university and military classes that broadened their knowledge more than in a traditional university environment.

Prior to graduating they both switched services, moving from the Army to the Air Force to focus on working with fixed-wing aircraft. Upon graduation both were posted to RAAF Edinburgh where they worked with the AP-3C Orion and electronic warfare.

In 2003, they married and a few years later they welcomed their first child. In 2007, just after their second child was born, they received a posting to Dallas, Texas, where they supported an aircraft modification project.

Upon returning to Australia with a third child, Adam and Emily undertook a number of aircraft acquisition projects before transitioning to civilian life.

Adam and Emily now own and operate AeroPM, a professional services firm operating predominantly within Defence and CASG, supporting complex asset acquisition. They employ over 50 talented acquisition specialists across more than 40 programs.

After years of successfully working together, they say empathy, patience and understanding are the three most important values within their relationship. They also ensure that they prioritise spending time with each other outside of the workplace.