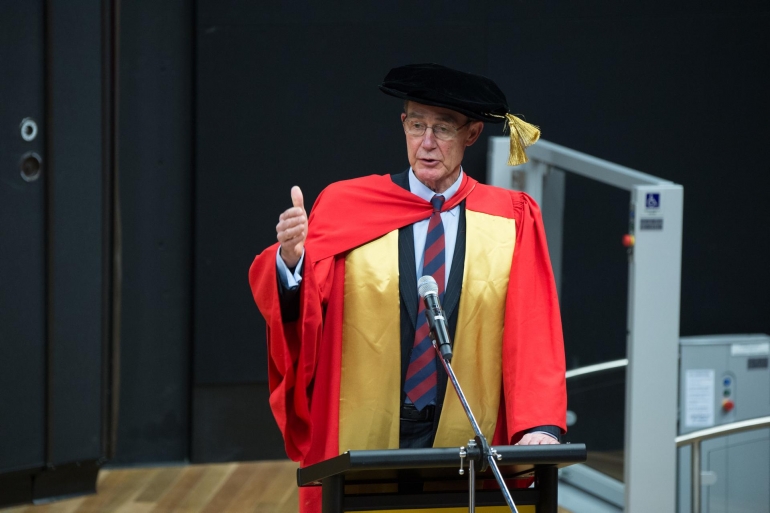 Mr David Gonski, Chancellor of UNSW was in Canberra to confer Sir Angus with this degree in a formal ceremony in front of the Senior Defence Personnel, ADFA Officer Cadets, UNSW Canberra Academic staff and inviting guests.

Doctor Houston has been a great ongoing supporter of UNSW’s important role at the Australian Defence Force Academy and volunteers his time to Chair the UNSW Canberra Advisory Council.

“I had a long association with the University and it has always been a very rich and rewarding relationship.  UNSW Canberra always played a central role in the education of  [ADFA] officers. Its high quality graduate and postgraduate courses without doubt enhance the quality and capability of the Australian Defence Force.

“The University always achieves excellent academic results… and I will always be very grateful for the contribution of the University to our Nation and the Defence Forces”, said Doctor Houston.

Doctor Houston focused his speech on addressing ADFA officer cadets and midshipmen and talked about what it takes to be the leader. “You are the future leaders of the Defence Force. It is absolutely imperative that you make the most of your opportunities here at this fine University”, said Doctor Houston, “You have got to be the best that you can be. Military services is all about duty, your duty at this stage is to excel and to come out of the university well prepared to the significant challenges you will face in the future”.

During his time in the military, Sir Angus sought to lead by example, empower, and work tirelessly for the welfare of those in his charge.

As Acting Chief of the Defence Force in 2002, Sir Angus’ personal courage in what became known as the Children Overboard incident became and remains an inspiring example of integrity and leadership.

As Chief of the Defence Force, Sir Angus oversaw the successful transition of the Australian Defence Force from peacetime training to a high operational tempo. This included challenging military operations and deployments in East Timor, Iraq and Afghanistan - 58 operations in total involving 65,000 individual deployments.

In his post-defence roles, Sir Angus served as Chair of the Anzac Centenary Advisory Board where he provided strategic advice to the Government on Australia’s commemorations for the 100th Anniversary of the First World War. In 2014, he also led Australia’s response to two major air disasters involving Malaysia Airlines.

Sir Angus is Chair of Airservices Australia, Chair of Defence South Australia Advisory Board, Chair of the Order of Australia Council and Chair of the Canberra Symphony Orchestra. He is a Board Member of the Lowy Institute for International Policy, the Australian Cancer Research Foundation, the Anzac Centenary Public Fund Board, the UNSW Canberra Advisory Council and GreaterGood Canberra. In addition, he is patron of numerous charitable organisations.

Air Chief Marshal Sir Angus Houston was awarded the Knight of the Order of Australia in January 2015 for extraordinary and pre-eminent achievement and merit in service to Australia.

The Honorary Conferral Ceremony is available for viewing on UNSW Canerra YouTube Channel.