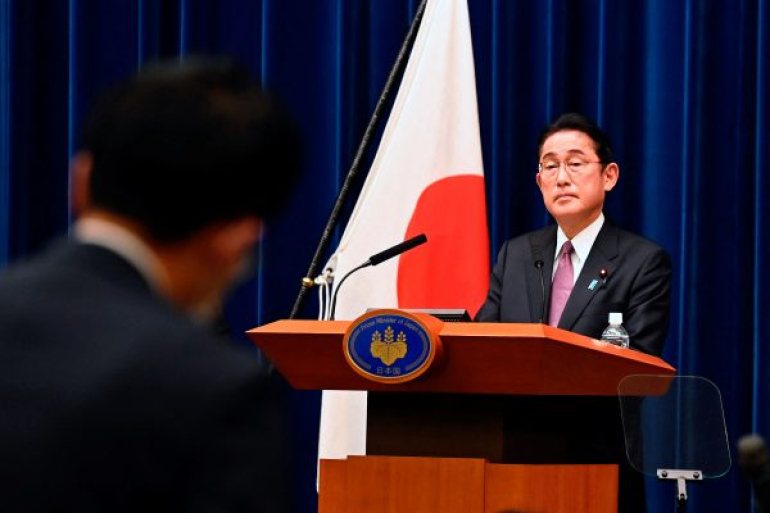 The past year has not been good for Japan, nor for Prime Minister Fumio Kishida’s government. Japan has faced a dramatically deteriorating global and regional security environment and a perfect storm of challenges on the home front, including the COVID-19 pandemic, soaring inflation and the ramifications of the assassination of former prime minister Shinzo Abe on 8 July.

Kishida initially touted himself as ‘the leader that this era needs’. He began with high approval ratings and a packed policy agenda. But by October, support for his government had plummeted to below 30 per cent with one popular magazine describing the public as ‘increasingly disgusted with Kishida’s lack of leadership’. Previous prime ministers, such as Kishida’s predecessor Yoshihide Suga, resigned with approval ratings this low.

As for the Kishida cabinet, the news was equally bad with an approval rate of just 31 per cent in November. This followed a series of ministerial departures likened to falling dominoes. The fate of another minister currently hangs in the balance.

The nature and extent of ties between the ruling Liberal Democratic Party and the Unification Church have slowly been revealed since Abe’s death. The issue prompted a cabinet reshuffle in August, with multiple ministers disclosing links to the church and Kishida’s instruction to ruling party members to sever any such connections. It still took five months for the government to produce legislation to prevent the kind of financial exploitation that motivated Abe’s killer.

The prime minister’s ‘leading by listening’ has given way to reports that he no longer heeds the advice of those around him, including Chief Cabinet Secretary Hirokazu Matsuno. Kishida lacks two critical support structures. The first is a ‘watchdog’ to protect him and lay the policy groundwork — the role that former prime minister Suga played for Abe. The second is Kishida’s lack of a strong protective supporter, particularly since the death of Abe, whom Kishida relied on as a sounding board, adviser and internal party influencer.

The result is a dysfunctional Prime Minister’s Office and an administration under pressure because of declining support rates. Even October’s comprehensive economic stimulus package designed to counter the weak yen and rising prices did not restore public confidence in the administration. Consumer prices (excluding those of food) have risen by nearly 4 per cent in a year while annual earnings have increased by only 3 per cent in 20 years. OECD statistics now put Japan’s annual per capita income 11th from the bottom among 34 comparable member countries.

Kishida’s paradigm-shifting economic policy initiatives, touted early in his administration, such as rejecting neoliberalism and building a ‘new model of capitalism for Japan’, remain unrealised. Early on, Kishida appeared willing to interfere in the free market, but building a broad middle class through income redistribution, a reduction in economic inequality and increased wages has been elusive. Nor have there been major advances on key measures such as regulatory reform and raising labour productivity.

Shortcomings on the home front have been counterbalanced by the prime minister’s busy diplomatic schedule including amicable meetings with South Korea’s President Yoon and Chinese President Xi, and the prospect of new Japan–China defence hotline in 2023. Relations with Taiwan are also expanding at the political level, continuing Abe’s legacy.

Another focus has been promoting Abe’s free and open Indo-Pacific initiative but the most pressing strategic challenges have been the increased threat level to Japanese security from North Korean ballistic missiles, a more belligerent Russia and the extraordinary expansion in Chinese military power and growing assertiveness in the region. The result has been a major rethink of Japanese defence policy, with the government approving revisions to three key national security documents. The new National Security Strategy now designates Russia as a ‘potential threat’ and China as ‘the greatest strategic challenge ever faced’.

In a major advancement in defence capability Japan will accelerate its acquisition of counterstrike missiles as part of an integrated air and missile defence system enabling ‘punitive deterrence’. This will include purchasing 500 US precision-guided Tomahawk cruise missiles as a stop-gap measure until Japan can develop its own standoff missiles, as well as plans to work with the United States on a joint counterattack capability plan and potential cooperation during deployment.

The issue of dramatically increasing Japan’s defence expenditure, however, has been highly contested even within the LDP. Kishida has pledged 43 trillion yen (US$313 billion) in defence expenditure over five years to fiscal 2027 – a rise of more than 50 per cent, or 2 per cent of GDP – but objections have been raised to each and every alternative to fund the increase. In the end, the LDP approved a basic framework of tax hikes involving income and corporate tax surcharges, and an increase in the tobacco tax.

It has been a difficult year for Kishida despite the ‘fresh start’ he got with the LDP’s sweeping victory in July’s upper house elections, the slight uptick in support for the cabinet in December and the continuing endorsement of all factions for his leadership.  Next year will be no easier with local government elections scheduled in April and big issues on the table such as mounting security challenges, a declining birth rate and overcoming obstacles to economic reform.

Aurelia George Mulgan is Professor at the School of Humanities and Social Sciences, the University of New South Wales, Canberra.

This article is republished from the East Asia Forum under a Creative Commons license. Read the original article.