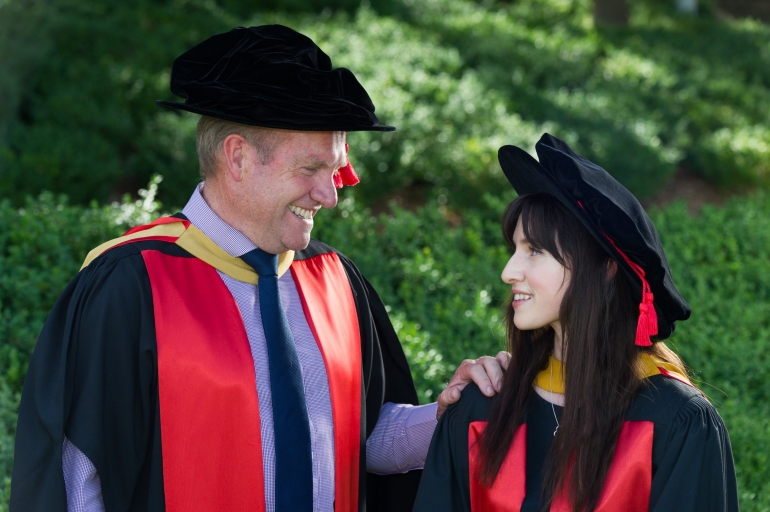 “If you thought 50 years ago that a father and a daughter would have PhDs from something called UNSW Canberra it would have been a foreign language.”

That’s according to Professor Tom Frame, whose 28-year-old daughter, Kelly, celebrates her PhD graduation from UNSW Canberra on Wednesday.

It will be 25 years, nearly to the day, that Kelly’s father Tom completed the first history PhD at the university campus.

UNSW Canberra, initially called University College, has come a long way since its inception 50 years ago as the world’s first tri-service tertiary institution at the Royal Military College Duntroon.

Professor Frame said: “Back in those days it was inconceivable that a service officer could get a PhD and then have a civilian daughter get a PhD from the same institution. This is the measure of the extent to which the relationship between the university and the Australian Defence Force has broadened, and the possibilities have increased.”

Kelly Frame, who is graduating with a PhD in English, said another positive change was being part of a female-dominated department: “In our little section there was certainly that sense that women could be lead thinkers. And there are some incredible female role models here that I look up to. I think we’ve got a way to go but the signs are all positive,” she said.

Following in her father’s footsteps was not at all daunting for Kelly: “He’s always been my number one fan and cheerleader,” she said. “I chose UNSW Canberra to do my PhD because I was so impressed by the warmth that I could anticipate coming from the place. The experience of the community here, and the dedication of the staff was so strong. I was so well supported not just by my supervisor who was amazing, but by all of the English academic staff, and other staff, so it’s the community the space provides as well as the superlative academic guidance.”

Kelly is not the first woman in her family to graduate from the university, said Professor Frame: “My wife did her degree at UNSW Canberra; I did, and Kelly did: there’s a kind of bonding in doing that. I’m thrilled, delighted and it’s been the highlight of the year - and that she’s going to wear my robes at the same time is just an added bonus. It’s a great university to be a part of and we’re looking forward to giving something back,” he said.