Support for young women in STEM adds up 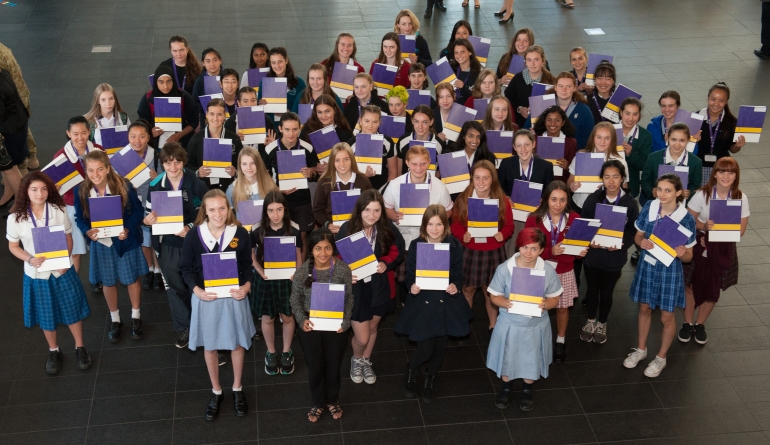 Canberra's brightest Year 8 and 9 female mathematics students were rewarded for their hard work today at the University of New South Wales Canberra.

The 54 girls, representing 27 schools, were the top performing female maths student in their school year in 2017. A further 108 students were recognised for placing second and third in their year.

The inaugural UNSW Canberra Prize for Best Female Student in Mathematics was launched to encourage young women to pursue studies and a career in the fields of science, technology, engineering and mathematics.

UNSW Canberra Rector Professor Michael Frater says all prize winners and runners-up will receive a $5000 undergraduate scholarship if they meet admission requirements and enrol in a Bachelor of Engineering degree at UNSW Canberra as a non-Defence student.

The prize winners will each receive $250. UNSW Canberra will also award runners-up with a double pass to the movies. Prize winners were nominated by their school.

"UNSW Canberra, together with the prize sponsor, Northrop Grumman, would like to celebrate the strength of female students in mathematics and encourage more young women to study maths at a tertiary level," Professor Frater says.

"UNSW Canberra is committed to reducing the gender gap in STEM subjects, as women represent only 16% of the STEM workforce, yet it is one of the fastest growing sectors."

In February, UNSW Canberra celebrated its 50th anniversary and the university has a proud tradition of teaching for the STEM professions.

The number of female undergraduate students starting a STEM degree at UNSW Canberra has increased by 92% in the past five years.

Principal of Namadgi School, Gareth Richards, says the maths prize is a great community initiative that will inspire young women's participation in STEM at school and beyond.

"Many public high schools across the ACT have commenced initiatives in STEM education with the focus on inclusive gender opportunities," Mr Richards says.

"Female students have been thriving through these STEM programs and it is fantastic to see UNSW Canberra support such an important initiative."