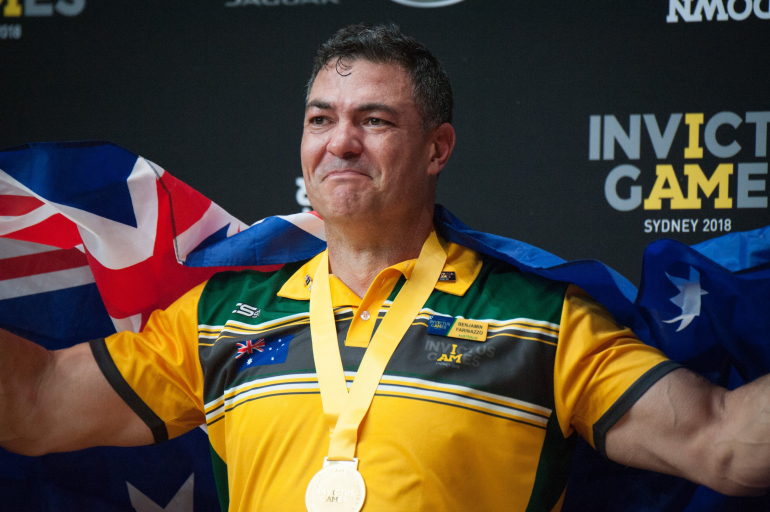 UNSW Canberra was today announced as the first Premier Partner of Invictus Australia, continuing its commitment to the spirit of the Invictus Games.

Invictus Australia is the legacy of the highly acclaimed Invictus Games Sydney 2018. The not-for-profit organisation delivers sport and recovery programs to improve the health and wellbeing of Australia’s 600,000+ military veterans and their families, as well as supporting Team Australia as they head to the Invictus Games The Hague, and future international teams.

The Invictus Games highlight the power of sport to inspire recovery, support rehabilitation and generate a wider understanding of those who serve their country. The Games also celebrate the crucial role played by family and friends in the recovery process.

The Invictus Games The Hague 2020 (postponed due to the coronavirus) will bring together 500 competitors from 20 nations to compete in a series of adaptive sports.

UNSW Canberra Dean and Rector Professor Emma Sparks said Invictus Australia’s mission aligns with the values of the University, which has a longstanding partnership with the Australian Defence Force as its tertiary education provider.

“The Invictus spirit is a powerful reminder of the strength, sacrifice and resilience of our veterans, many of whom begin their military journey with UNSW Canberra at the Australian Defence Force Academy,” Professor Sparks said.

“We’ll be cheering on two UNSW Canberra graduates at the Invictus Games this year as they compete in a range of sports, including athletics, swimming and wheelchair basketball.”

Invictus Australia CEO Michael Hartung said the organisation was delighted that UNSW Canberra has signed on as the first Premier Partner of Invictus Australia, having previously been a strong supporter of the 2018 Sydney Invictus Games.

“We have a shared commitment and aligned goals around providing positive and tangible impact to the veteran community, through our expertise in sport and education,” Mr Hartung said.

“With the campus embedded at the Australia Defence Force Academy and a commitment to the education of our current and former serving military personnel, this partnership is a perfect fit. The support provided by this relationship will allow us to strengthen the wellbeing of more veterans and their families through the power of sport, particularly UNSW Canberra alumni and current students.”

Alumnus and Australian Army veteran Chris O’Brien is looking forward to his first Games, where he will compete in wheelchair basketball, sitting volleyball and swimming.

He said the partnership between Invictus Australia and UNSW Canberra demonstrated the importance of veteran health and wellbeing to both organisations.

“UNSW Canberra, through the Australian Defence Force Academy, is pivotal in the physical and academic development of many of the ADF’s young leaders at the beginning of their careers, a number of whom – like myself – may find themselves in the Invictus Australia program at its conclusion,” Mr O’Brien said.

“It is my hope that through this initiative, both organisations will benefit from the exchange of experiences and lessons learned, so that we might better prepare and support our soldiers, sailors and aviators through their careers in the ADF and beyond.

“Most importantly, this partnership signifies an acknowledgment that more can be achieved together than individually, and is a warmly welcomed step in Australia’s development of a world-leading veteran support program.”

The Invictus Games begins at The Hague, Netherlands, on Saturday, 16 April. UNSW Canberra wishes all competitors the best of luck.