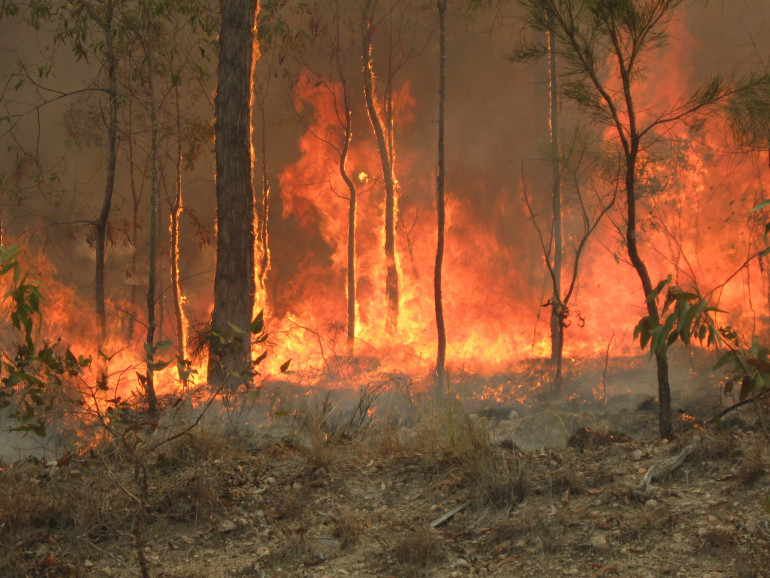 While Australia grapples with an early start to the 2019 bushfire season, a UNSW Canberra-led study on the 2018 Queensland bushfires has been released. It provides new insights into the links between enhanced greenhouse gases and bushfire events.

The study was part of the 2018 edition of Explaining Extreme Events from a Climate Perspective, an annual report published by the Bulletin of the American Meteorological Society (BAMS).

The BAMS publication presents assessments of how human-caused climate change may have affected the strength and likelihood of individual extreme events such as heatwaves, droughts and floods.

UNSW Canberra’s Dr Sophie Lewis and Associate Professor Jason Sharples worked with researchers from UNSW Sydney, the University of Melbourne and the Bureau of Meteorology.

The study explains how aspects contributing to the November 2018 fires were four times more likely to have happened because of climate change.

Dr Lewis, a climate scientist specialising in extreme climate events, said record-breaking temperatures and below average rainfall were among the contributing factors to the 2018 bushfires.

“The weather conditions, including the atmospheric circulation, were really important contributors to the 2018 northeast Australian fires,” Dr Lewis said.

“High background temperatures also played a role and model evidence suggests that these temperature extremes were more likely because of human activity.”

She said the 2018 bushfire season was declared early in many Australian jurisdictions. By the end of November, 130 bushfires had caused significant damage in Queensland, burning almost three-quarters of a million hectares.

Dr Sharples, an applied mathematician specialising in bushfire risk management, said the fires were unprecedented, in that no event of this scale had previously occurred at such northerly coastal locations.

“Events that are unprecedented in a given region, such as the 2018 event, reveal that firefighting preparation and training cannot rely on previous events as guidance for the most dangerous conditions they can expect in the current and future climate where large scale fires occur more regularly,” Dr Sharples said.

He said using models to simulate each variable for the region and season in question could provide a more accurate assessment of dangerous bushfire weather conditions.

“While the combination of many factors was necessary for the fires to occur, we should be paying close attention to any of these that are being influenced by climate change,” Dr Lewis said.

“In southern Australia there has been a clear trend toward more dangerous fire conditions during spring and summer, as well as an earlier start to fire seasons, and in 2019 we have seen early fires across the country.”

Deconstructing Factors Contributing to the 2018 Fire Weather in Queensland, Australia is available via doi.org/10.1175/BAMS-D-19-0144.1

Firestorms and flaming tornadoes: how bushfires create their own ferocious weather systems